'Rule Britannia' and 'Land of Hope and Glory' could be axed by the BBC at the Last Night of the Proms in the wake of the Black Lives Matter (BLM) movement!

The BBC is taking advantage of the COVID pandemic to introduce changes to the music content of the event, including the phasing out of the anthems at a time where there is no audience participation allowed in the hope that nobody will notice.

These anthems exemplify the entirely justifiable pride that all patriotic Britons have for their country, and their proposed removal by politically correct virtue-signalling BBC bosses - another step on the slippery slope of moral decline, just to appease a bunch of anarchic Marxists and Communist BLM thugs - must be strongly resisted by everyone who loves their country.

Take part in our campaign and your message will be sent immediately and automatically to Jan Younghusband, the head of BBC music TV commissioning, and Lord Hall, Director General of the BBC: 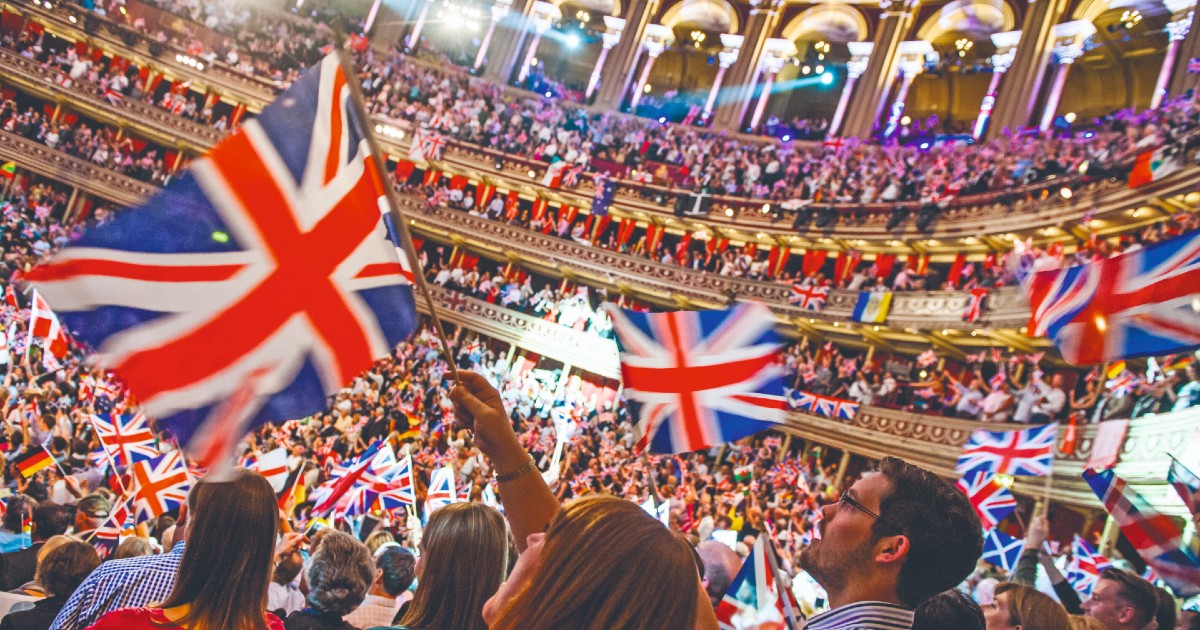 The UK Government has been awarding contracts worth hundreds of millions of pounds to service companies, such as Serco, in order to provide accommodation for 'refugees' and 'asylum seekers' - who in many if not most cases are simply economic chancers and illegal immigrants.

The result has been that up to 50,000 of these illegal immigrants, who contribute virtually nothing to the economy, have been housed in luxury - including four-star hotels - at the expense of the British taxpayer.

Some of these service contracts are due to run for the next ten years, giving the clearest indication that our Government is prepared to do next to nothing to get these illegal immigrants out of our country and returned to their countries of origin.

Britain First calls upon our Government to stop providing luxury accommodation to these illegal immigrants forthwith, and to cancel all future contracts with Serco until such time as migration can be properly controlled and managed to the advantage of the native population.

Take part in our campaign and your message will be sent immediately and automatically to Priti Patel, the Home Secretary, and Boris Johnson, the Prime Minister: 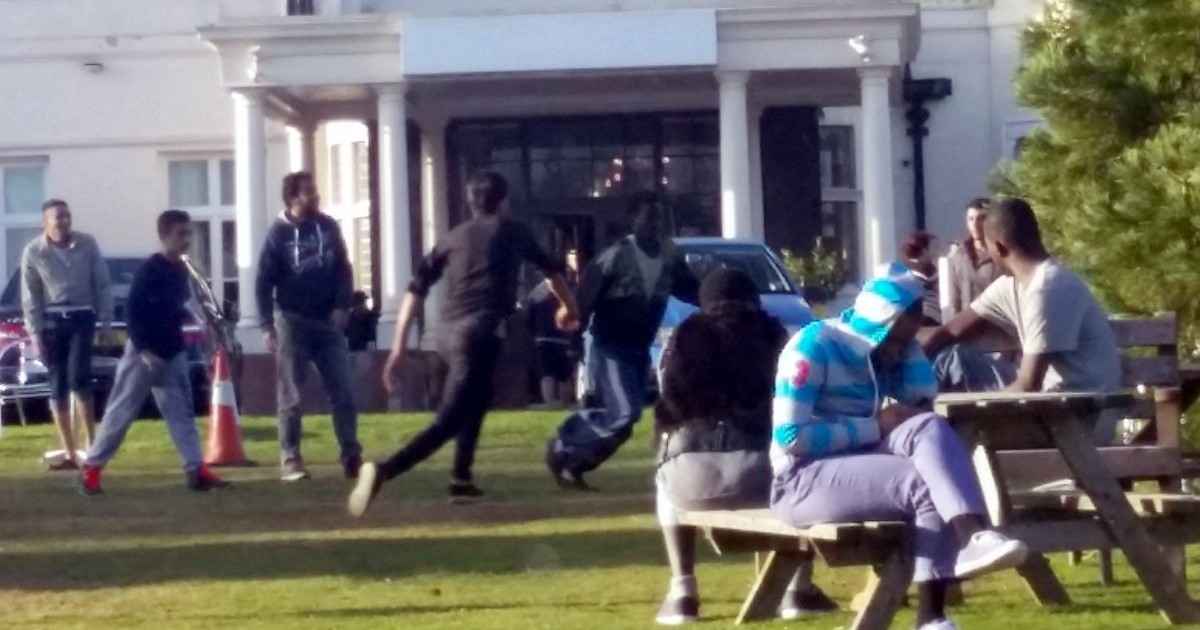 Ant Middleton (above) is a true inspiration and a much-needed role model for our British youth.

He served with Special Forces in Afghanistan, has climbed Mount Everest, has been the Chief Instructor on the Channel 4 program SAS: Who Dares Wins, and currently holds the honorary position of Chief Cadet in the Volunteer Cadet Corps of the Royal Navy.

However, his honorary position is now under threat because of his comments on the violence and destruction wrought by communist Black Lives Matter (BLM) protestors.

Middleton justifiably described them as 'absolute scum' after they vandalised our statues.

Although Ant Middleton has subsequently explained the reasoning behind his comments - and has apologised for any offence caused - the explanation and apology appear to be insufficient and his virtue-signalling bosses in the Royal Navy hierarchy are reportedly intent on sacking him this week.

Britain First considers this to be an absolute disgrace and a betrayal of all the traditional British values that are embodied in the remarkable figure of this selfless veteran who has contributed so much to our country and we will fight this persecution tooth and nail to make sure that he stays in his post as Chief Cadet.

Take part in our campaign and your message will be sent immediately and automatically to Lt Col Terence Wing, the Commander of the Volunteer Cadet Corps, and Major Chris Spratt, Deputy Commander: 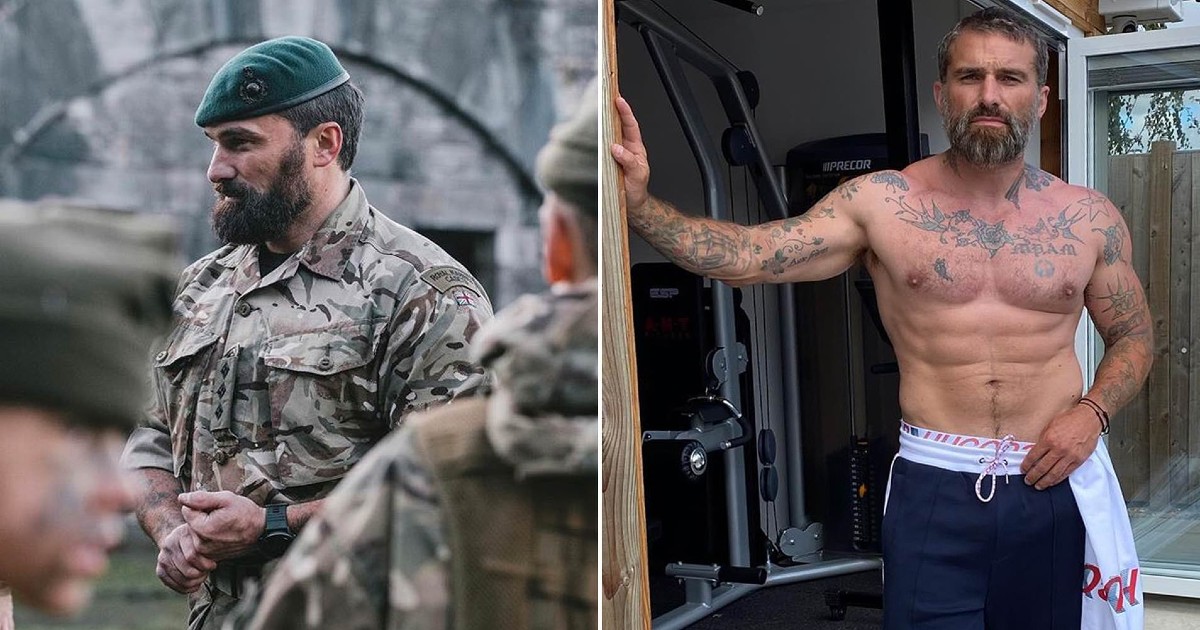 The statue of the great philanthropist Edward Colston was recently torn down from its plinth in Bristol because, like many other merchants of his time, his company's complicity in the trans-Atlantic slave trade allegedly makes him a racist by today's 'woke' standards.

However, a local artist has erected a sculpture of a Black Lives Matter (BLM) activist in its place fist raised in a 'black power' salute!

The irony of this appears to be lost on Bristol City Council, whose weak and spineless response has been to say that 'it does not appear that planning permission was obtained for this sculpture'.

Britain First have a forthright message for Bristol City Council:

Tear down this offensive work of racism immediately, or face the wrath of the Britain First movement!

To send a complaint demanding that the black power statue is taken down immediately, use the form below and your message will be sent immediately and automatically to Mike Jackson, CEO of Bristol City Council, and Marvin Rees, Mayor of Bristol: 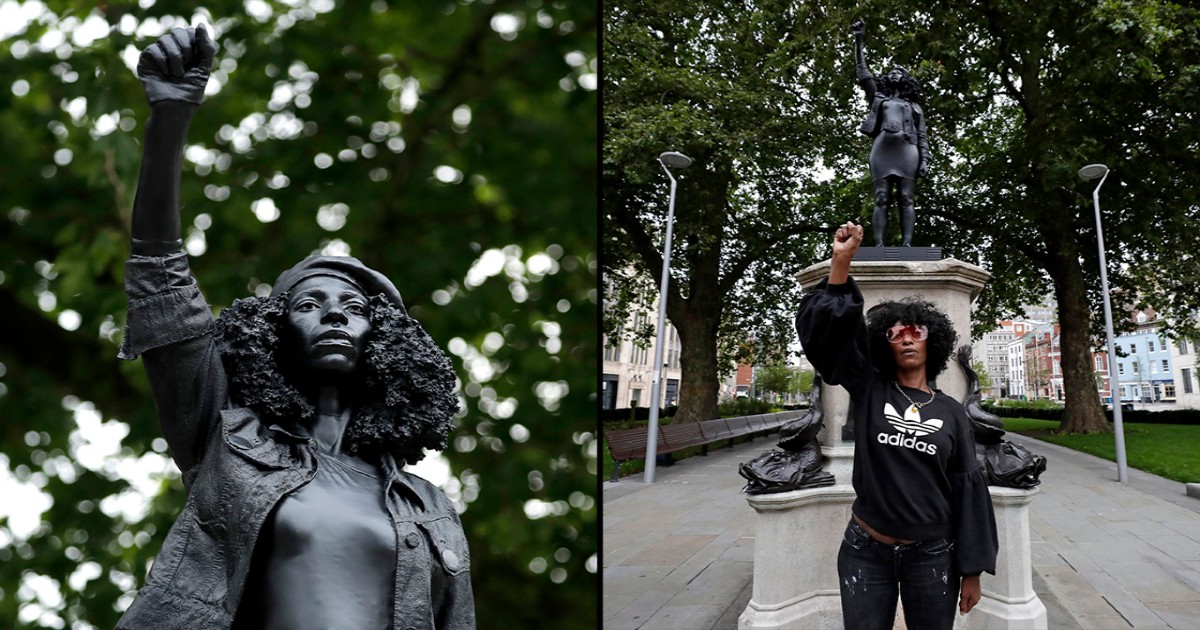 A painting of the Last Supper featuring a black Jesus is being showcased at St Albans Cathedral in Hertfordshire in solidarity with the Black Lives Matter (BLM) movement.

This comes after the Dean of St Albans said that the church was in a weak position to preach about 'racial justice', whatever that means.

However, the BLM movement is based on an anarchic, communist ideology that advocates - among other things - the overthrow of capitalism, the destruction of the nuclear family and the abolition of the police and justice system.

Britain First believes that the Church of England should cease with its politically correct grandstanding and highlight the issues that are important to Christians, such as social decay, sexual degeneracy in society, the sexualisation of our children, anti-Christian propaganda from the liberal-left and the collapse of Christian values and morals.

We demand that all senior church leaders disassociate themselves from the communist Black Lives Matter movement and its demands for a communist, Soviet society in which Christianity will be sidelined.

Take part in our campaign and your message will be sent immediately and automatically to the Dean of St Albans, the Very Reverend Dr Jeffery John, and the Archbishop of Canterbury, the Most Reverend Justin Welby: 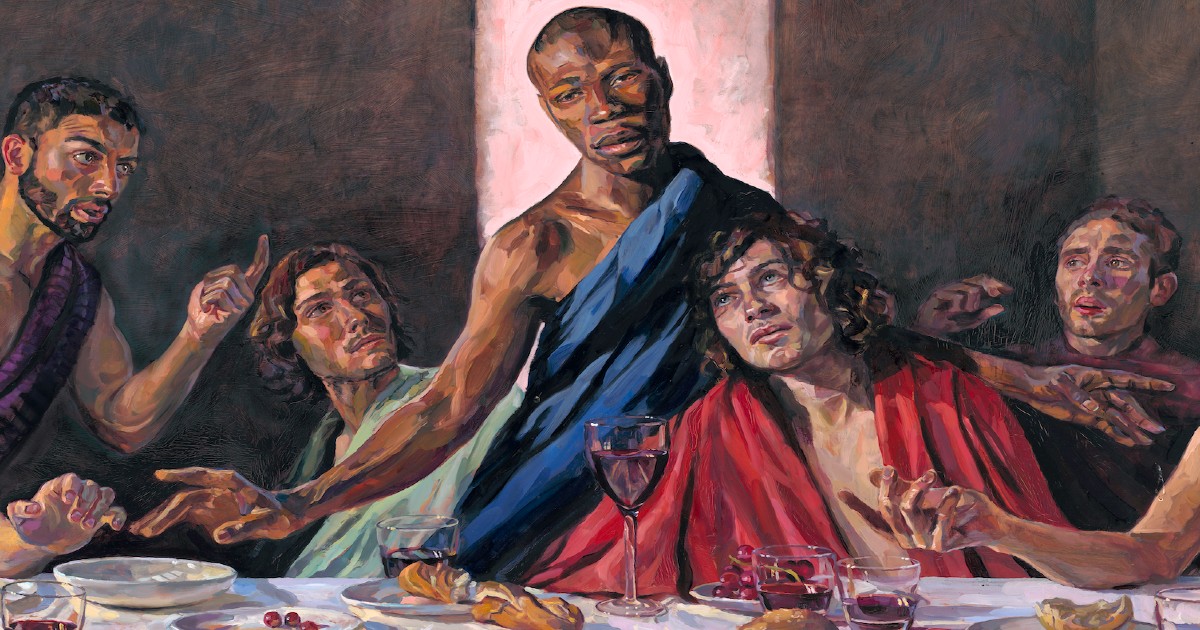 Priyamvada Gopal, a professor at the University of Cambridge has caused a storm with a series of racist comments on Twitter.

Cambridge University appear to have no problem with her racist statements.

Britain First are calling for an investigation by the 'Equality and Human Rights Commission' as such blatant racist behaviour should not go unpunished in a civilised society.

Take part in our campaign and your message will be sent immediately and automatically to the Equality and Human Rights Commissioners: 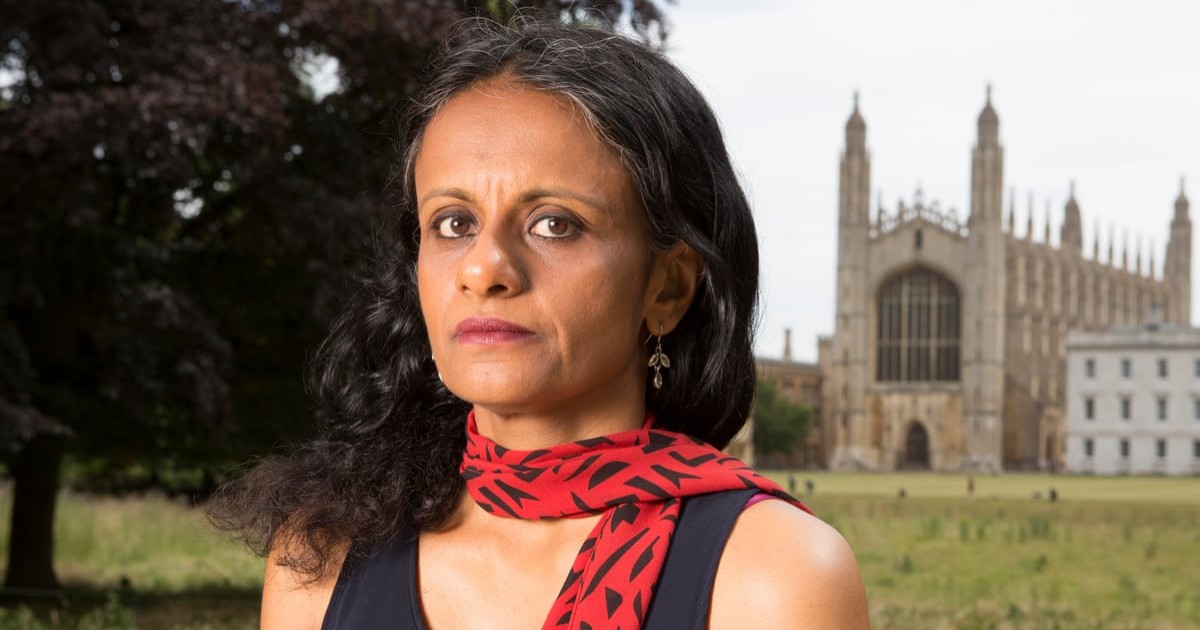 However the educational materials included in the 'Diversity Role Models Home Learning Pack' state that 'love has no age limit' - which has long been the mantra of the Paedophile Information Exchange.

The educational materials also include references to books (such as 'Beyond Magenta') that contain inappropriate and graphic descriptions of oral sex between children and adults.

Britain First believes that the normalisation of paedophilia has no place within our education system or indeed anywhere in a civilised society, and we demand that Asda sever it's links with the 'Diversity Role Models' organisation forthwith.

Take part in our campaign and your message will be sent immediately and automatically to Roger Burnley, the CEO of the Asda supermarket chain: 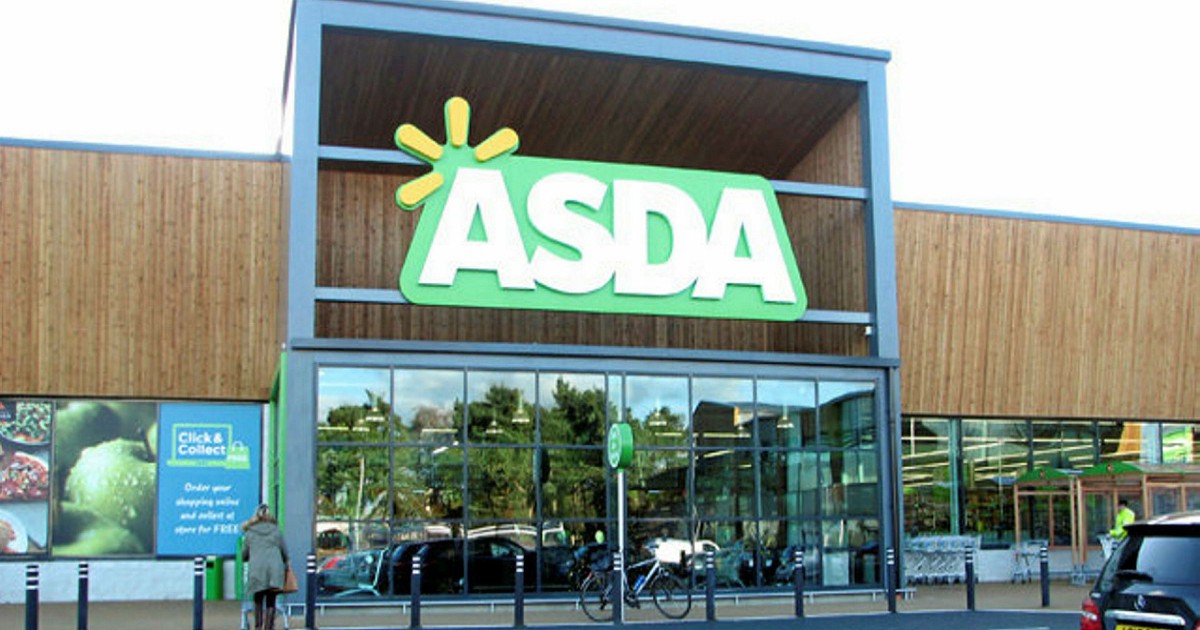 The executives of Yorkshire Tea have fallen over themselves to endorse the extreme violence of the Black Lives Matter movement in the name of virtue signalling their opposition to 'racism', 'imperialism' and 'capitalism'.

However, Yorkshire Tea was itself founded on imperialism, capitalism and the exploitation of Indian tea workers since the late 1800s.

Britain First calls for a public apology for, and an end to, the cowardice and hypocrisy of the owners of Yorkshire Tea.

Take part in our campaign and your message will be sent immediately and automatically to Simon Eyles, the CEO of Yorkshire Tea: 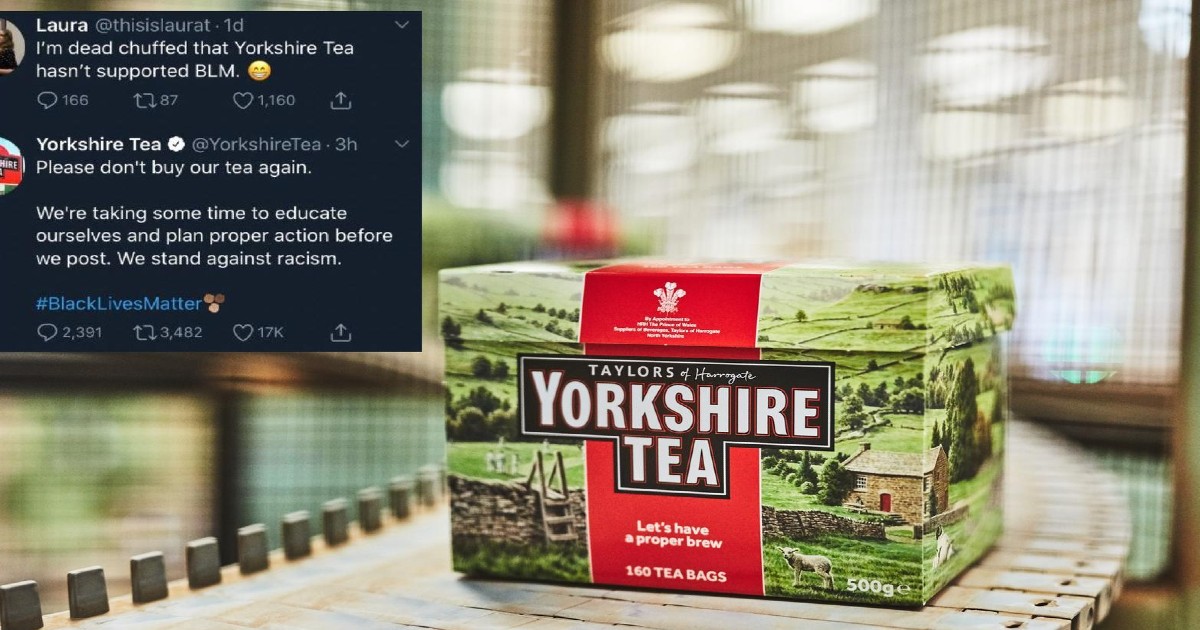 During a speech at a 'Black Lives Matter' demonstration he told his audience that they should stop spending money in 'white-owned' businesses and shops, i.e. the 'white' economy, and instead invest in 'black-owned' businesses.

Joshua conveniently overlooks the fact that his major sponsors, those companies who put their trust and their money into making him what he is today - the likes of Under Armour, Jaguar Land Rover, Beats, Sky Sports and Hugo Boss - are all 'white-owned' businesses.

We call upon Anthony Joshua's numerous sponsors to cut all ties with him and end his sponsorship forthwith.

Take part in our campaign and your message will be sent immediately and automatically to the CEO and chief executives of Under Armour, Jaguar Land Rover, Beats, Sky Sports and Hugo Boss: 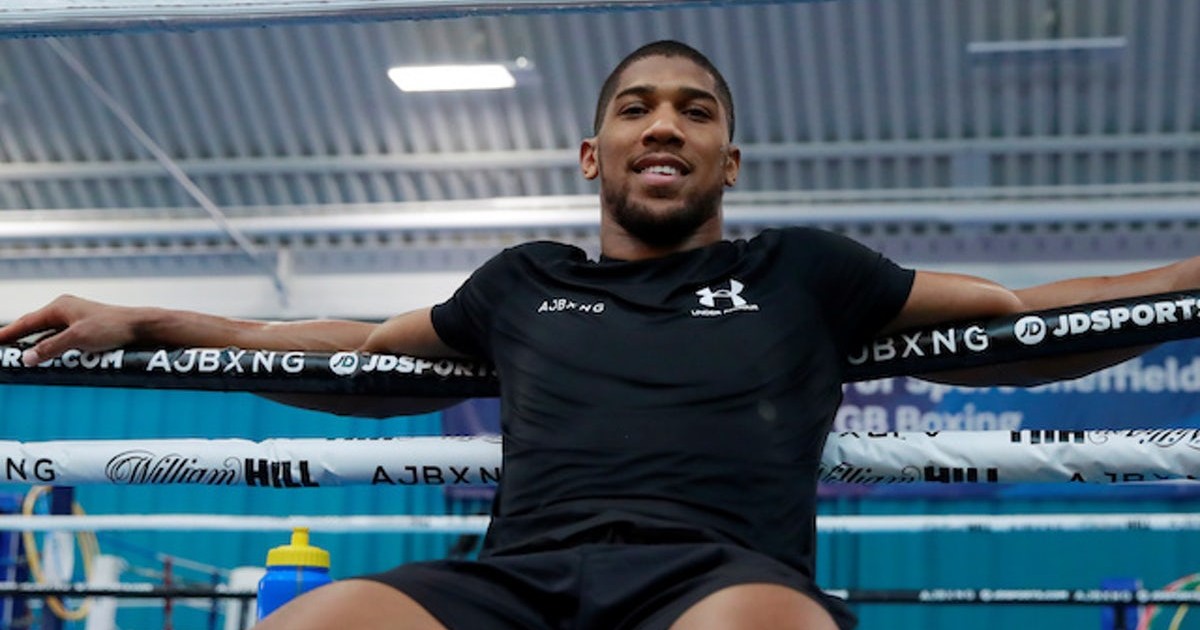 On Mother's Day - Sunday 22 March this year - seven-year-old Emily Jones (pictured) was brutally murdered in front of her parents in a Bolton park by Eltiona Skana, a 30-year-old Albanian immigrant.

Bolton City Council evidently saw no need at that time to display solidarity with the shocked and grief-stricken community by, for example, lighting up the town hall, preferring instead to play down the disastrous effects of mass immigration on our country - including the exponential rise in violent crime perpetrated upon the native white community.

However in the wake of the rioting, looting and mayhem by 'Black Lives Matter' protesters all across America, Europe and the UK following the death of George Floyd, Bolton City Council have shown themselves all too keen to appease the black community by - yes, you guessed it - lighting up the town hall, and other civic buildings, in a display of solidarity.

Actions speak louder than words - and Bolton City Council are clearly of the opinion that while 'black lives matter' - white lives don't.

Britain First however, are of the opinion that white lives do matter, so take part in our campaign and your message will be sent immediately and automatically to the Mayor of Bolton, Councillor Linda Thomas, and the Leader of the Council, David Greenhalgh: 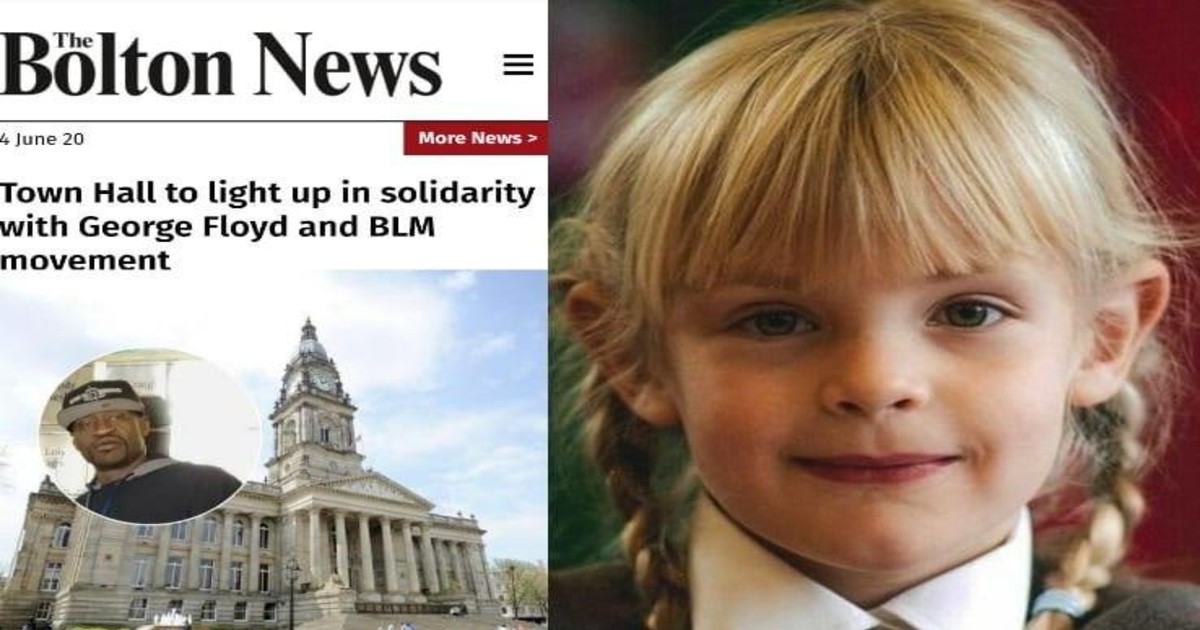