Jayda and I were sent to prison back in March for ‘harassing’ migrant rapists, and shortly after Facebook closed down our fan pages, cutting off 2.6 million of our supporters worldwide. 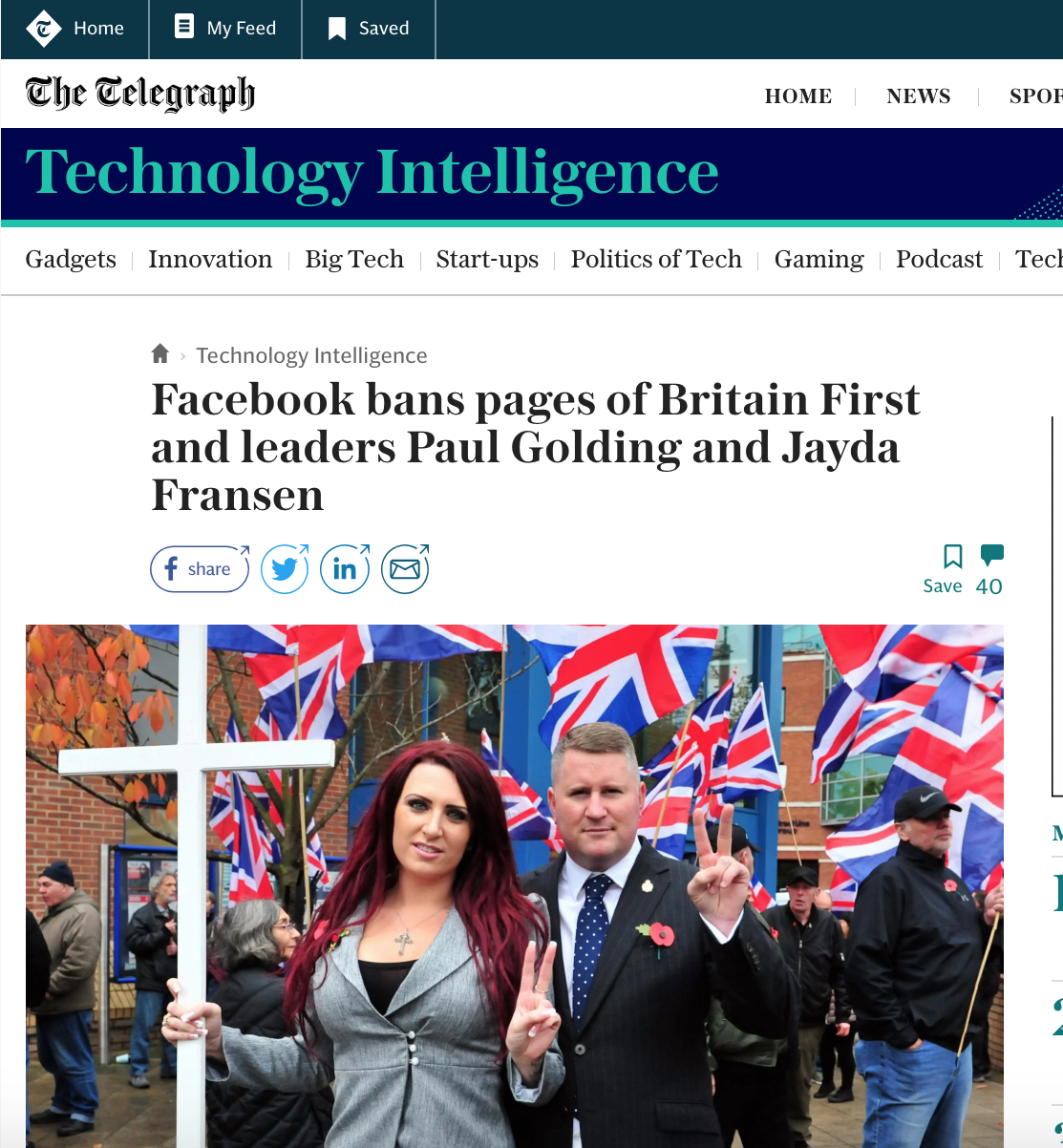 It came out in Parliament from the mouth of the Prime Minister herself that the Home Office had been pressuring Facebook to close our pages down.

This whole saga was nothing to do with our supposed ‘hate speech’ – it was all to do with closing down the popular social media accounts of a rival political movement that was growing so rapidly that the establishment were freaking out.

It was pure, unbridled political censorship at its worst.

Behind the scenes over the last few weeks – unknown to our supporters – our legal representatives have been corresponding with Facebook, back and forth.

In a nutshell, our legal representatives have given Facebook until this Friday 3rd August to allow Britain First to set up new fan pages or we will issue proceedings in Belfast against them!

Facebook’s solicitors replied back this morning, saying they will not allow Britain First back onto Facebook.

So how can Britain First win a victory in court against Facebook and force them to treat us the same as everyone else?

You see, in Northern Ireland, political discrimination is illegal, because of the Good Friday Agreement and associated legislation.

On the mainland, in England, Scotland and Wales, discrimination only covers things like race, religion, sexual orientation etc. but in Northern Ireland, it covers ‘political beliefs’ as well. 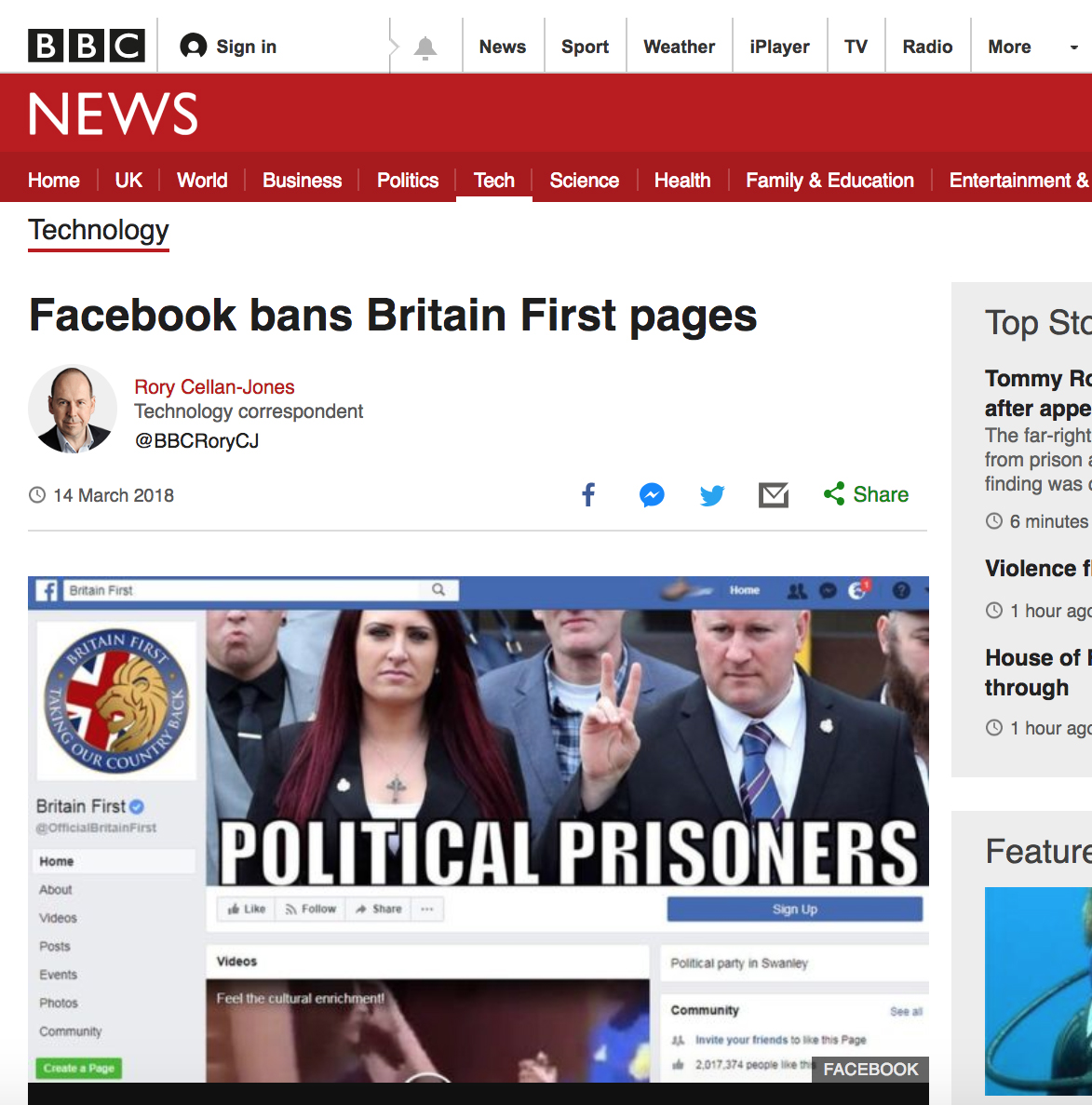 Under the ‘Fair Employment and Treatment Order 1998’, discrimination and denial of services on grounds of ‘political opinion’ is illegal.

As a new political party in Northern Ireland, we intend to contest any forthcoming local council elections.

Our legal reps have pointed out to Facebook they are breaking the law and engaging in political discrimination, but Facebook are digging their heels in! 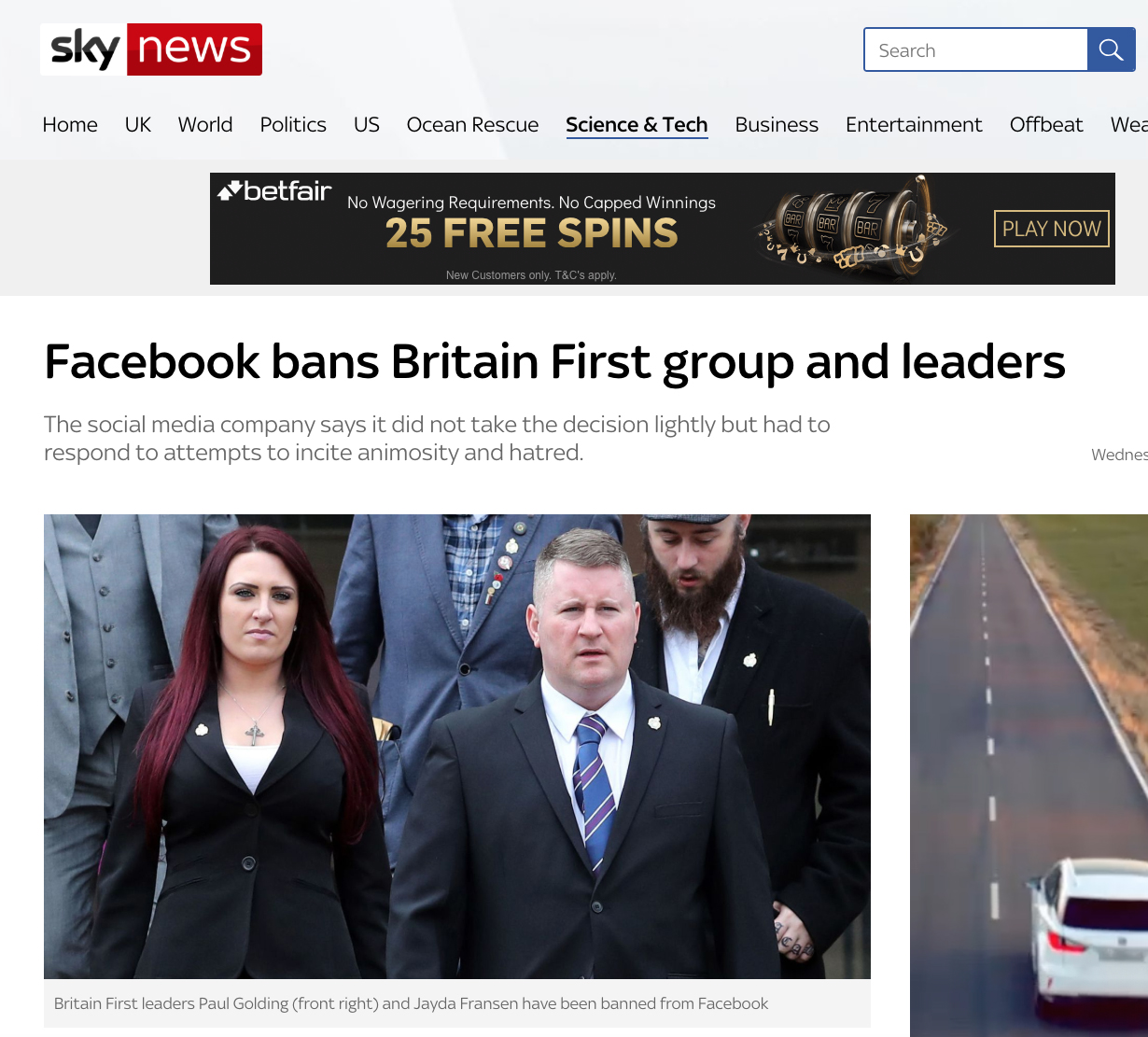 Our team in Belfast have compiled a huge bundle of evidence – including hundreds of screenshots - which clearly demonstrates that Facebook has singled Britain First out for political discrimination and that ‘hate speech’ doesn’t apply at all.

The law is quite clear in Northern Ireland: You cannot single out and discriminate against organisations or individuals because of their political beliefs!

It is against the law and there are big penalties for those who break this particular law!

Theresa May herself stated in Parliament that the UK government pressured Facebook to take our pages down, so Facebook hasn’t got a leg to stand on!

Imagine Facebook losing a case in Belfast and being forced to reinstate our lost pages! 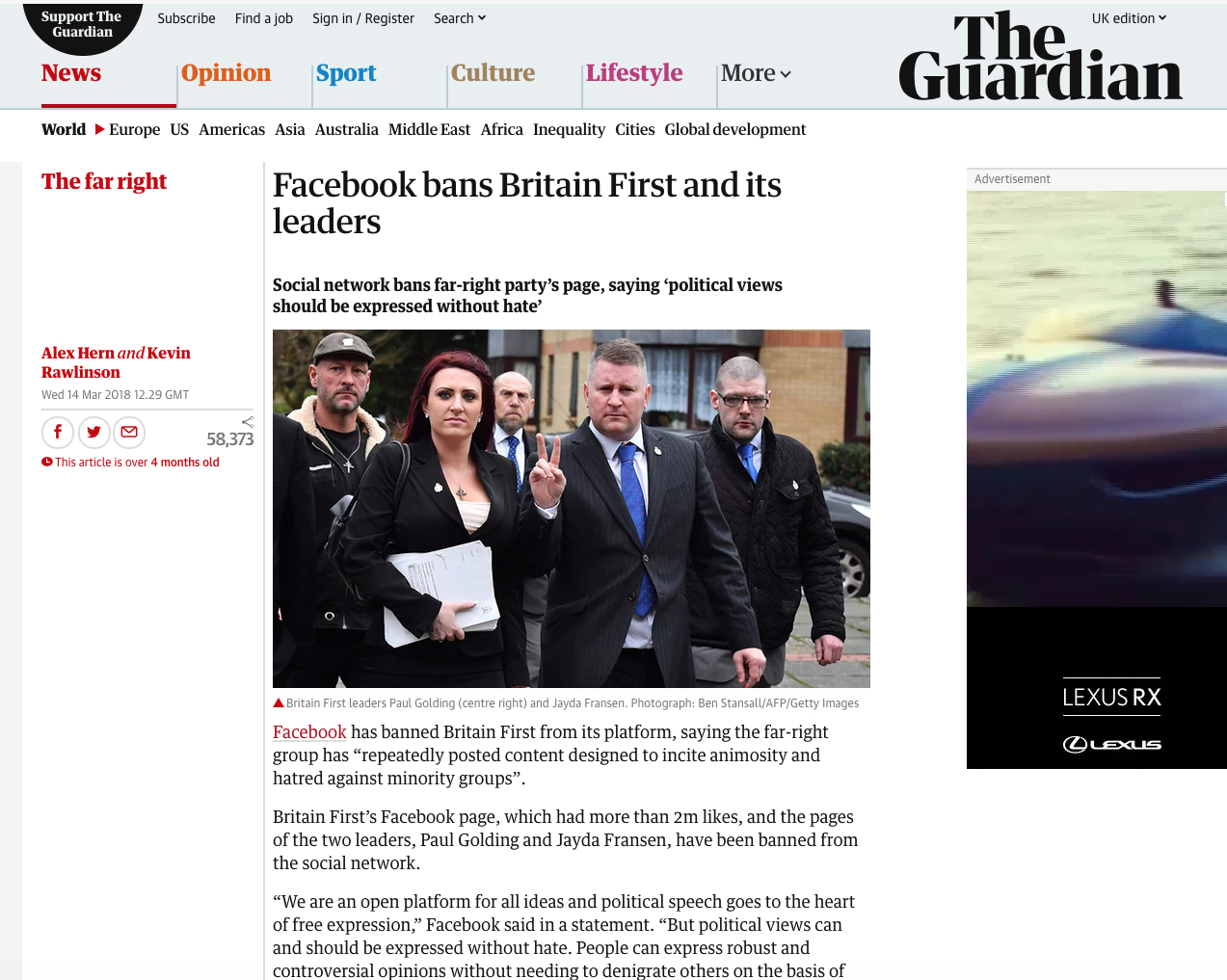 Imagine Facebook getting a County Court Judgement against them at the hands of Britain First!

It will be international news and a colossal victory for free speech for all patriotic counter-jihad groups across the West!

Believe me, this is really possible and we have been making preparations for months now.

We now have Facebook exactly where we want them and we are going to issue proceedings on Friday if Facebook doesn’t back down and allow free speech.

This isn’t just a battle for Britain First – this is a battle for free speech, for democracy and the memory of our ancestors who died in their millions for liberty and freedom.

A victory against Facebook will be a hammer blow to leftwing censorship and it is a precedent that can be used by other individuals and organisations should they face censorship.

I am pleading with you to be a part of this mighty crusade for free speech against the fascist social media tech giants.

How many time have you had posts taken down and then been banned for 30 days by fascist Facebook moderators?

The Cambridge Analytica scandal is still rumbling on. 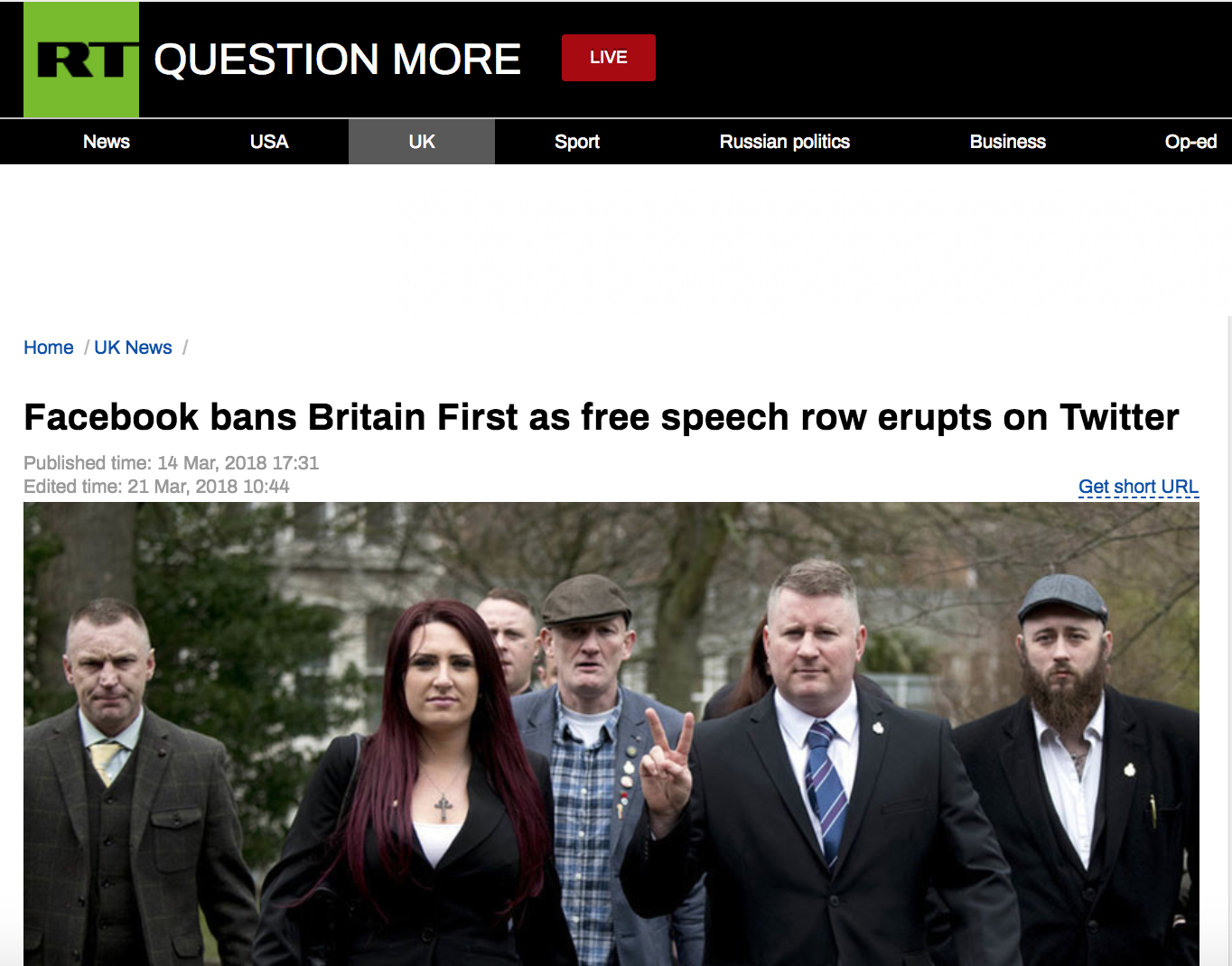 Mark Zuckerberg is being questioned left, right and centre about the increasingly hostile censorship of patriots, conservatives and right-wing political groups on Facebook.

In the last week, Facebook’s shares tumbled some £120 billion because of scandals and slow growth.

There are rumours that US president Donald Trump is getting fed up of Facebook’s increasingly hostile approach to those on the right-wing of politics.

The last thing Facebook wants is a CCJ against them for political censorship – it would be an embarrassing story that would get coverage worldwide.

But, for minimal cost, we can take on Facebook and defeat them, ushering in a new era of social media freedom not just for Britain First but for all patriots.

As leader of Britain First, I am calling on you to swing your support behind this crusade. 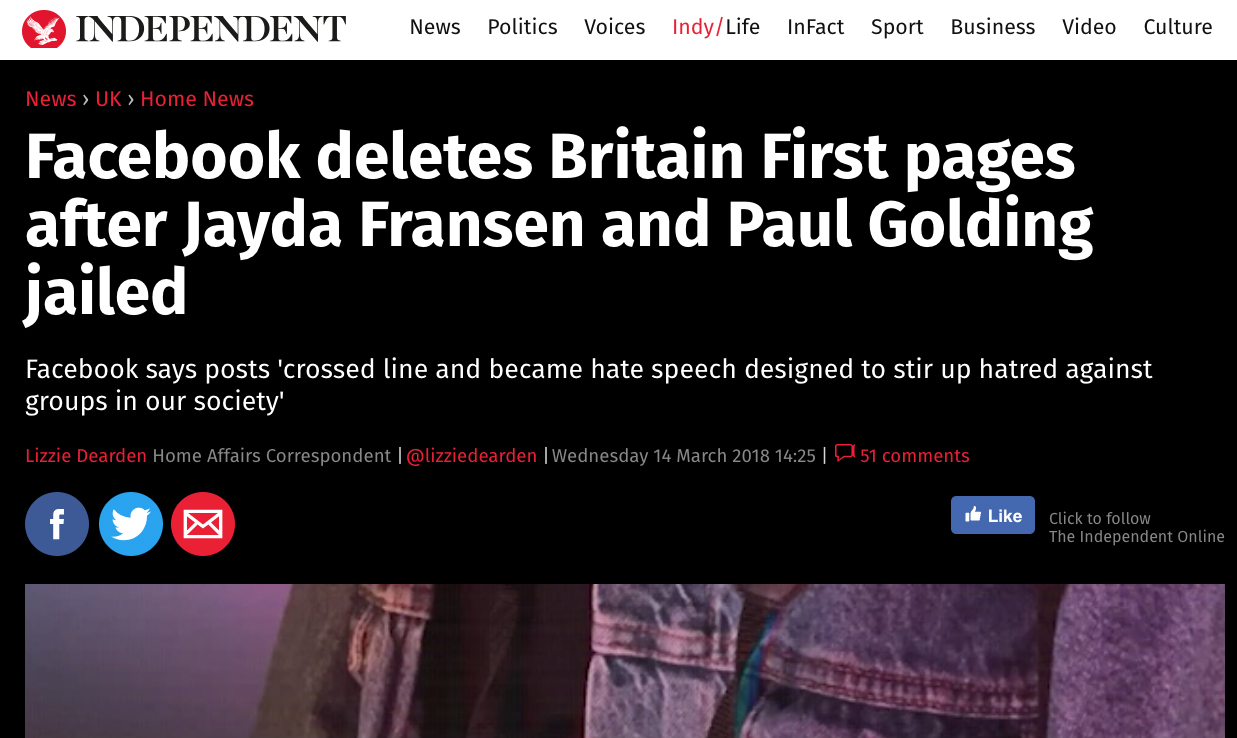 If our supporters ignore this operation, then we will continue to be censored by leftwing bigots on Facebook and Britain First will be pushed out unfairly.

Just imagine the uproar when we win in court against Facebook!

That’s why I am asking you to be a part of this exciting and critically important campaign against Facebook!

I am gunning for a big showdown with Facebook and can’t wait to teach them a lesson – will you fight by my side?

As leader of this honourable movement - that was built from nothing - I will not stand by and watch as everything is destroyed by the PC fascist fanatics in social media.

Over my dead body will I see them dismantle everything we have built!

If we are going to continue the struggle to save our country, please ‘close ranks’ and get behind us as we drag Facebook to court!