There is now only three weeks until I will be on trial for an offence under the Terrorism Act 2000.

For me personally, that's most probably three weeks before I am sent back to prison for the third time.

Where will I be sent? Belmarsh? Pentonville?

Wherever I am sent, the prison will be run by jihadi Islamist gangs, that's a fact.

When I was sent to HMP Elmley in Kent back in 2018, it took around three days for a bearded Islamist gang to invade my cell and attack me.

I sustained bloody injuries and the whole attack was caught on camera.

I could have lost my life there and then.

Unbelievably, no charges for ABH/assault were given to the Islamist gang in question.

They literally have a license to kill me when I am in prison.

After this attack, I was moved to a different wing and immediately I received death threats from Muslim inmates who were serving life sentences on the landing above.

The prison authorities immediately put me down in the isolation dungeon, which was disgusting, unclean and filthy.

I spent weeks with no TV and nothing but a few books to keep me company.

The authorities were trying to break me, hoping that extreme isolation would drive me insane.

Regardless of what prison I am sent to, I know for a fact that the authorities will be hoping that I am targeted by Islamist prison gangs again.

This is why they like to send me to prison, because sooner or later I will be killed.

I was brutally attacked last time, but this time they could slash my throat with the many bladed objects that infest UK prisons.

For me, this is a matter of life or death.

And the worst part is, this entire prosecution happened because I refused to give the police access to my phone at Heathrow Airport.

I didn't burgle a house, nor stab someone, nor commit murder.

No, I am being charged under the Terrorism Act 2000 because I refused to give the police access to my phone and hard-drive.

Under the Terrorism Act 2000, the police do not even have to confirm in court if I am under any suspicion of involvement in terrorist activities.

According to the law, I simply have to hand over my mobile and hard-drive while inside an airport and give them the pincodes/passwords without any hesitation.

Well, I am not a pushover and have been arrested nearly twenty times and prosecuted over ten times.

I have been in three different prisons and been attacked by Islamist gangs.

There are terrorists serving life sentences in Belmarsh for plotting to chop my head off.

I am not a shrinking violet, so as far as I am concerned, the police can take a running jump off the nearest bridge!

I will never willingly hand the police the pincodes and passwords for anything.

It would be an outrageous invasion of my privacy!

Now the police are trying to undermine me again.

Court cases are being postponed nationwide and the justice system is practically shut down.

Not for Paul Golding it isn't!

No, I have been informed that my trial will 100% take place on Wednesday 20 May, regardless of lockdown or restrictions.

There are two reasons for this:

Firstly, the establishment knows full well that Britain First is not fundraising while the lockdown is in place, so how will I be able to pay for a barrister?

Secondly, if the lockdown is in place, they hope that I will be forced to go to court virtually on my own without any supporters.

Regardless of what is happening with coronavirus, they want me in court on 20 May penniless and on my lonesome.

They try to screw me over every chance they get!

Once again though, they underestimate me, and our movement.

We will not allow ourselves to be trampled on, never!

If they insist I be put on trial on 20 May during the lockdown, then hundreds and hundreds of our supporters will be coming with me, shoulder-to-shoulder, regardless.

They want me to turn up to my trial on my own, but that is not going to happen!

Literally the entire Britain First movement - along with our friends and allies - are going to descend on Westminster Magistrate's Court on 20 May. 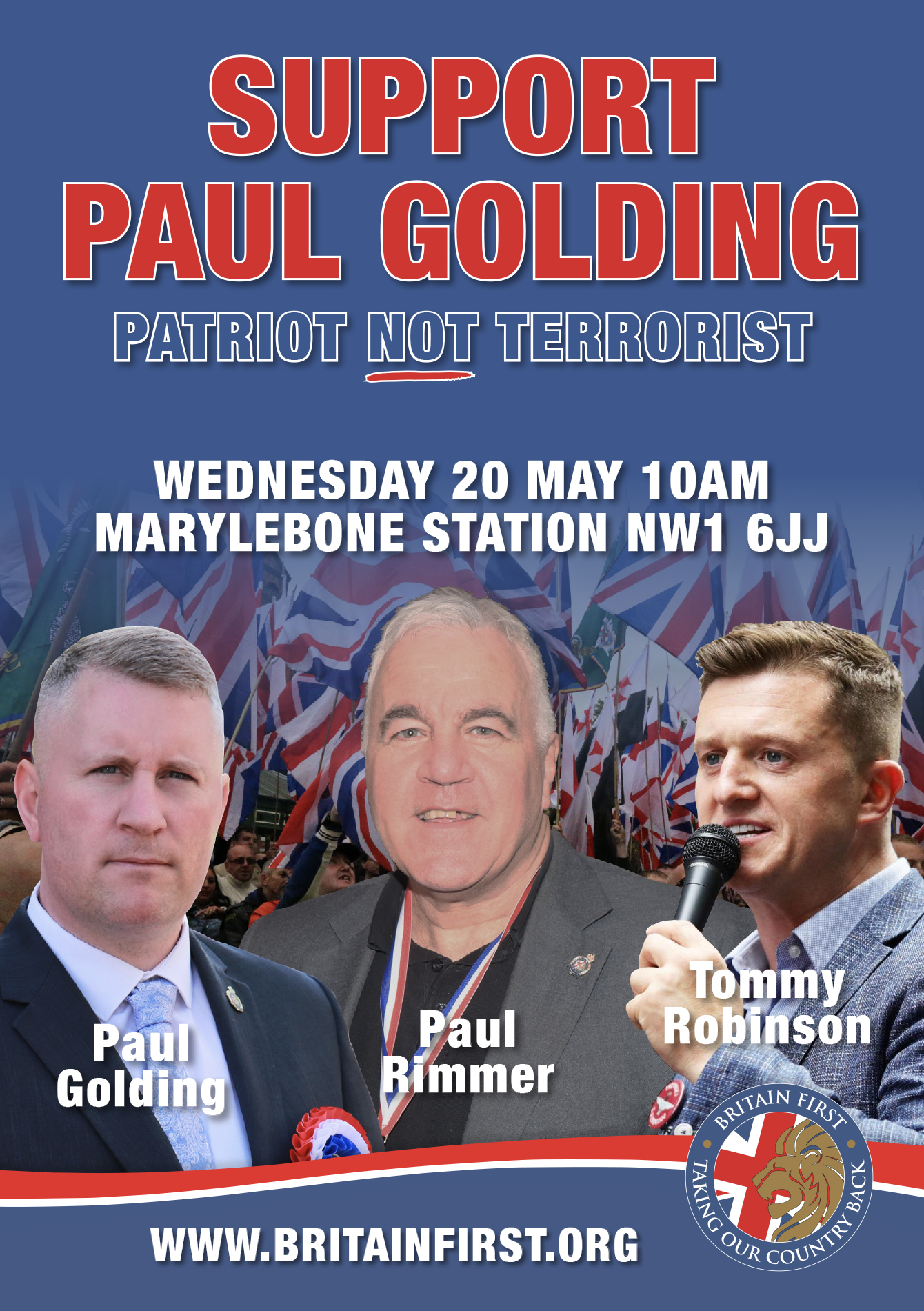 Even friendly patriots like Tommy Robinson have publicly stated they are attending with me, regardless of whether or not there's still a lockdown!

The police will shortly realise that, at my trial, there will be hundreds, maybe thousands, of patriots outside the court building!

If they persist, it will be their decision that led to all this, not mine.

Screw them, if they think I'm dumb enough to turn up on my own then they have greatly miscalculated!

Secondly, I now have three weeks to pay our expert legal team £5,000 and they are hoping that, due to the lockdown, I will be unable to pay this.

I fully understand that times are hard and because of the coronavirus the near future is very uncertain.

But, thanks to the police insisting that I be put on trial during the lockdown, I have no choice but to ask our supporters to chip in and help me pay for an expert legal defence.

I mentioned previously that my solicitor and barrister for this trial do nothing else except defend clients on Terrorism Act 2000 charges.

It's their bread and butter, so I couldn't hope for a better legal defence team.

Whether I like it or not, I simply have to ask our supporters to help me, and the blame lies with the police.

Imagine if I go on trial without a legal team, I would 100% be heading for prison and immense danger, and they know it.

So they have put me in this horrible position where I am forced to ask our supporters for help.

I am completely depending on our supporters, for without your help, I am good as dead.

Prison for me will be a dangerous place and I may not come out alive.

If you can help me, I would really appreciate it.

Please click below to chip in with whatever you can afford:

PS: I want to thank you all in advance, I know how tough things are at present. God bless you all.