URGENT: Get behind our 'National Banner Blitz'

Message from party leader Paul Golding - Despite being completely banned from social media, Britain First is still punching far above its weight.

We are the only significant patriot/nationalist movement in this country that is making the news and trending on Twitter on a regular basis.

In particular, our national anti-grooming campaign has achieved great things since it was launched at the beginning of the year.

We have caused consternation across England, in councils, social services, in the media and with the police.

Sharia patrols have been formed to keep us away from mosques, to stop us asking for their help in combating local grooming gangs.

Despite the censorship, our anti-grooming action videos across England have received millions of views!

But, I am still not satisfied.

I want to take this campaign to another level.

And thanks to a supporter who left a comment on our VK page, I think we have found a solution.

As you may have seen already, HQ has ordered several huge anti-grooming banners, with the following slogan written in giant letters (below): 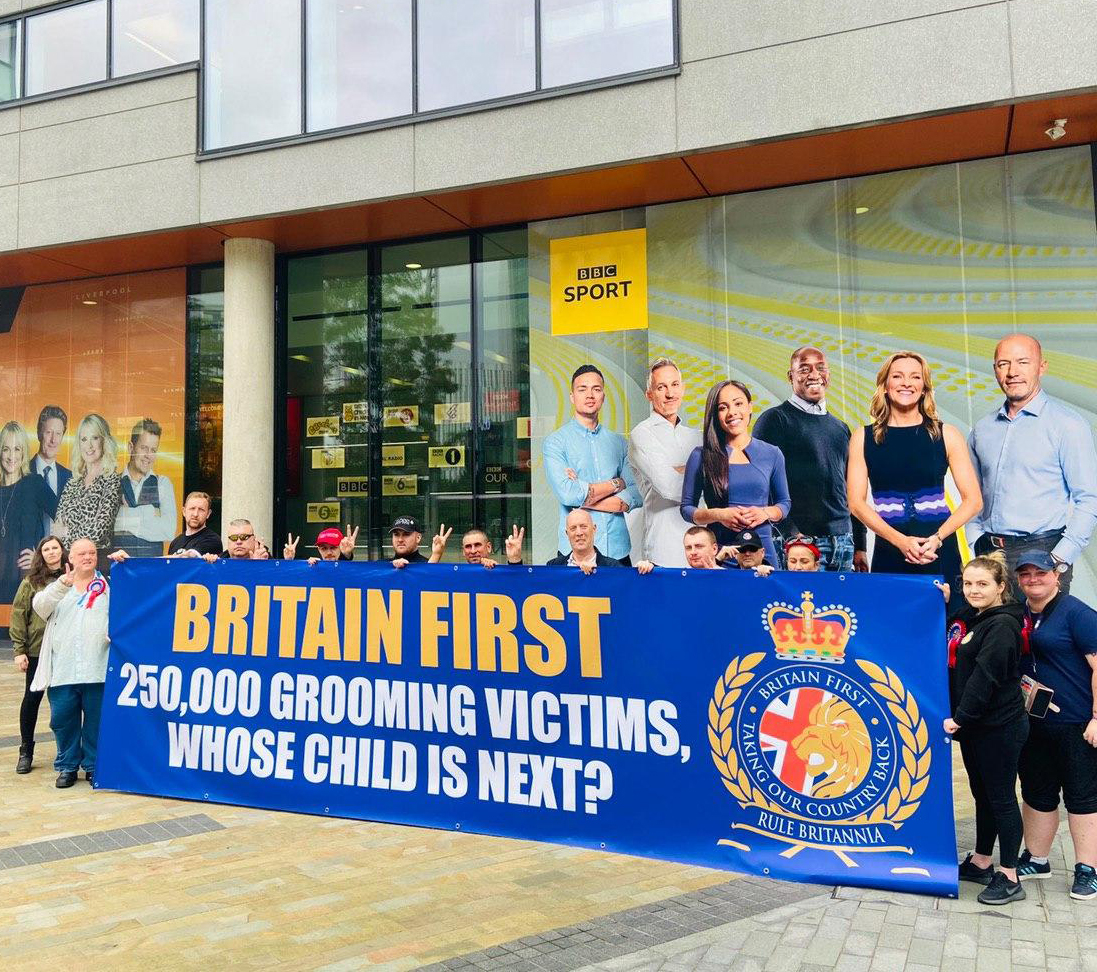 Our activists in the North West held this banner above a busy A road in Manchester and it caused a storm, with an endless stream of support in the form of beeping horns. 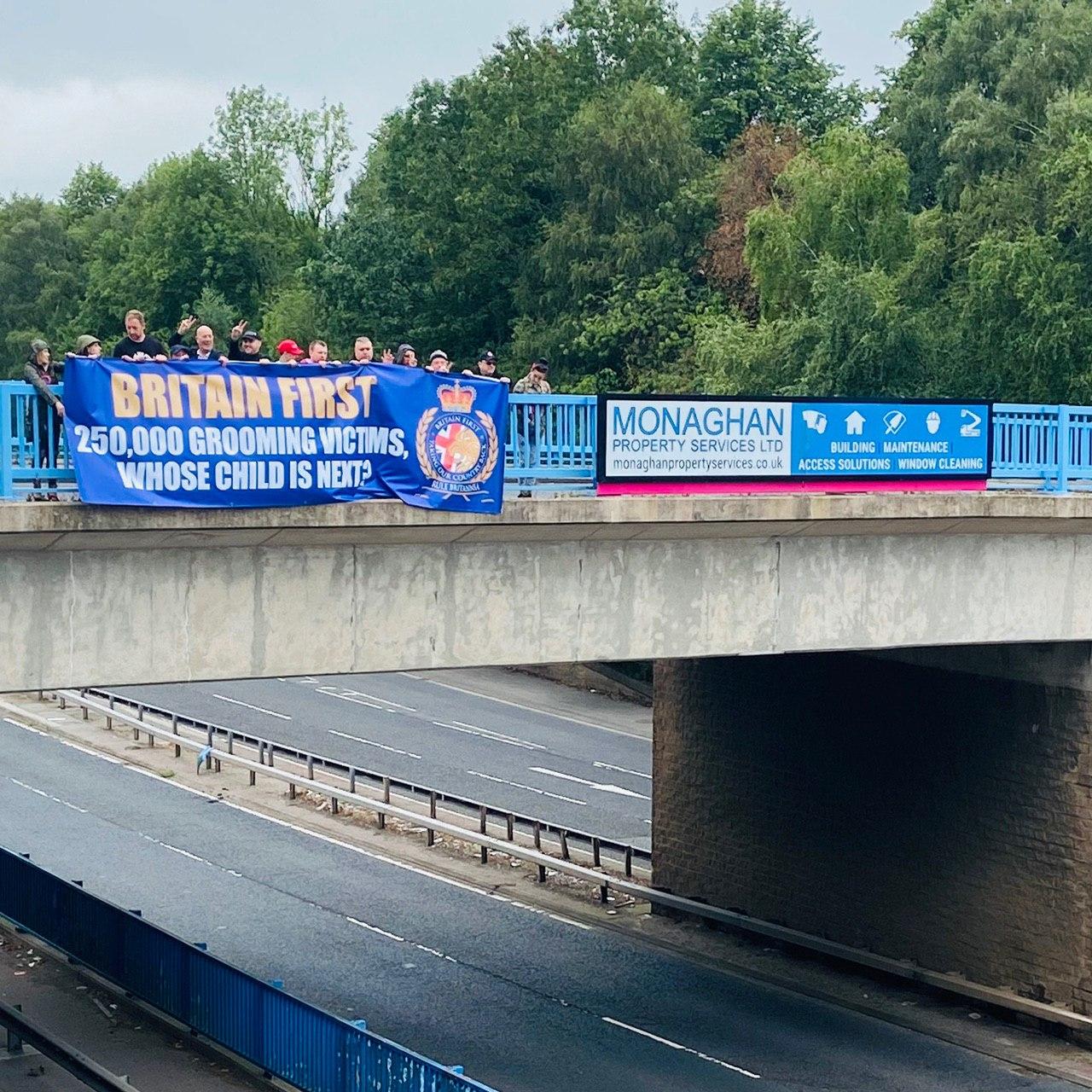 Some of the Manchester press has been in touch to cover the story.

Doing this activity was highly effective in displaying this powerful message before thousands of motorists in a very short space of time.

Based on this impressive new tactic, we have formulated an 'action plan'.

Imagine a town like Rochdale, a major Islamist grooming hotspot.

Imagine ten separate/small Britain First activist teams turning up and displaying these huge banners at every major road, motorway, A road, junction and town centre road across the entire town.

It would be a plague of banners had descended on the whole town! 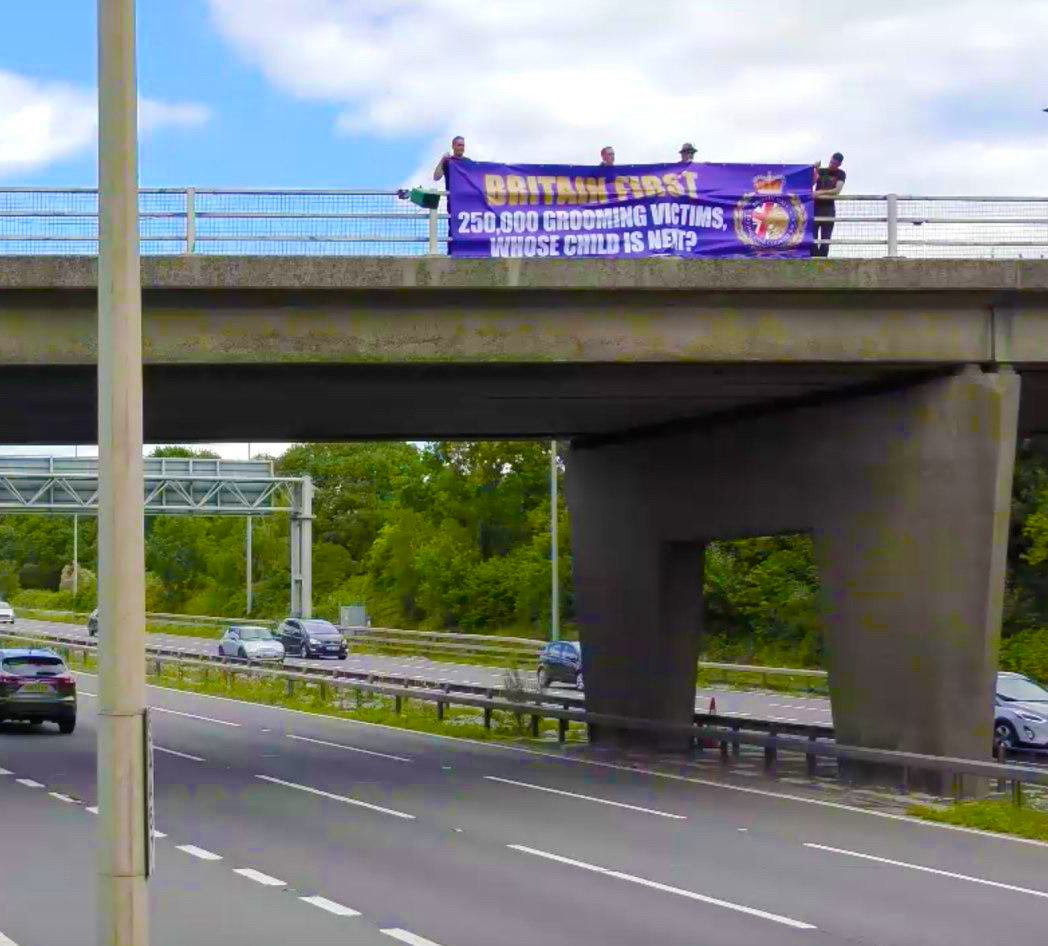 In a grooming hotspot town like Rochdale, it would cause a major furore!

The whole town would be in uproar, the local dhimmi MPs would crawl out from under their rocks to condemn us, the Islamic organisations and 'leaders' in the town would run to the media crying, it would generate massive publicity, and much more.

Imagine a nationwide blitz on every major motorway in the UK, with activist teams holding our huge banners on the walkway bridges that criss-cross the whole network.

If we covered every motorway in the UK (easily done), we would reach hundreds of thousands of motorists very easily in a single day.

This would attract howls of condemnation from the politicians and the media. 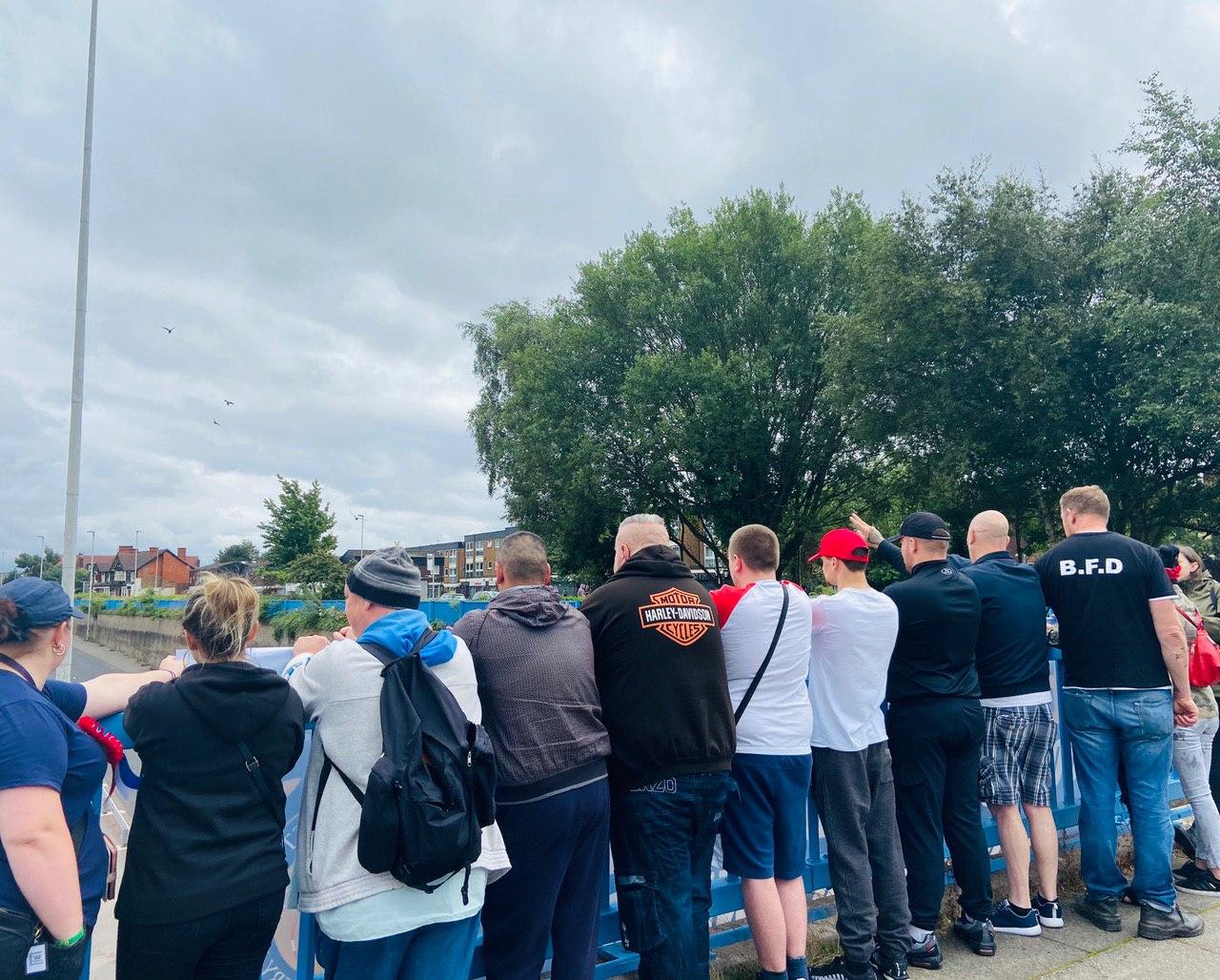 Both these attack plans can be used, one after the other, until we have created national uproar!

This is a great and worthy campaign to get behind.

It would highlight the issue of Islamist grooming gangs like nothing that has been done before!

We are so excited about this campaign - and the media frenzy it will inevitably cause - that we will devote the rest of the summer to making sure this is a massive success.

We are calling this our 'Nationwide Banner Blitz' campaign and I intend to get it launched and executed without delay!

But, my friend, this is all 'pie in the sky' unless we can find the resources we need to purchase dozens of these huge and expensive banners.

Without the necessary funding, it is nothing but a fantasy, a daydream.

Will you help us get this exciting campaign in motion?

You see, finding a banner producer online to get these done for Britain First at internet prices is very difficult. 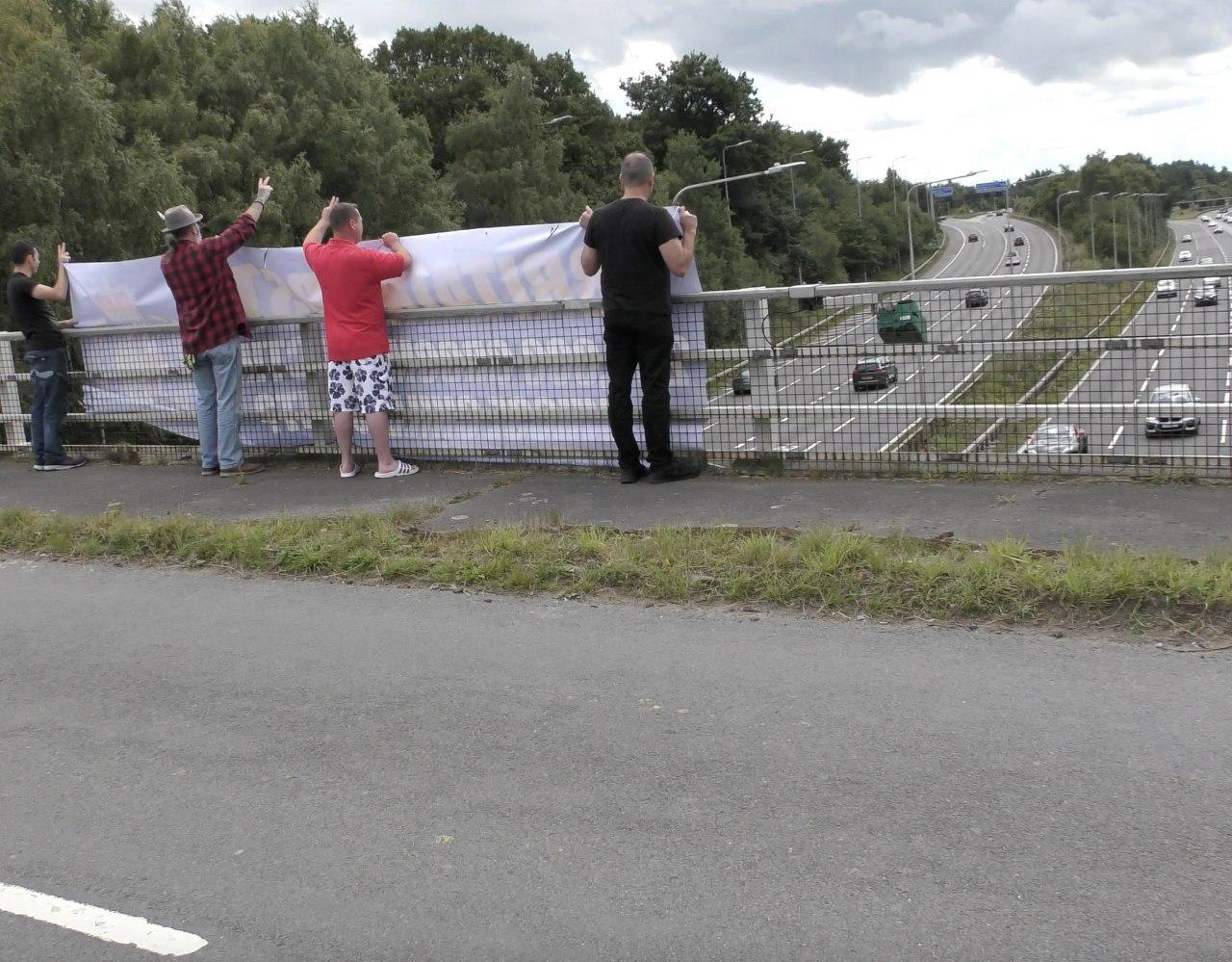 Most printers are terrified to work with us, so we have to pay more than what can be found online.

There is nothing we can do about this unfortunately.

I have spoken to our usual banner producer and because we are purchasing dozens of the same banner, he has agreed to knock twenty percent off the total price.

This is excellent news, so we have agreed to a deal:

Under the circumstances, this is a good deal for us.

Imagine a town like Oldham, Bradford, Telford or Rochdale being smothered in thirty banners at the same time in a single day.

It would rock the town to the core!

Likewise, on the national motorway network, all in a single day with dozens of activist units working simultaneously nationwide.

So, I am asking you personally to chip in to this awesome campaign plan and help us get it launched.

Britain First is a movement of action, not words.

When we say we are going to organise a campaign, we get off our backsides and do it!

Nothing stands in our way, and we are highly organised and ruthlessly efficient.

Unlike a lot of chancers out there, we are not armchair warriors and keyboard soldiers!

If there is any organisation in this country that can make these ambitious plans a reality, it is Britain First.

Isn't that worth throwing your weight behind?

Please chip in today with whatever you can afford - every penny counts - and I promise you we will get this organised asap: